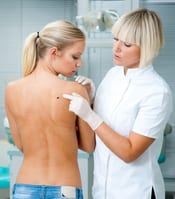 A congenital, or melanocytic, nevus is a mole that is present from birth or develops during the first year of life. Congenital nevi, typically dark in color and often hairy, can vary in size and shape and may enlarge as the child grows. Most congenital nevi are harmless, but should always be checked and monitored by a dermatologist because they have the potential to become malignant, and because patients with this type of mole are at increased risk for melanoma. Congenital nevi are categorized into three types: small, medium and giant. Small congenital nevi are quite common and rarely cause problems. Giant nevi, often referred to as bathing trunk nevi, may grow to eight inches in diameter. Giant nevi carry the most risk of cancer, with a one in six chance of becoming malignant.

Causes of a Congenital Nevus

Believed to develop as a result of some abnormality in fetal development, congenital nevi may occur with other conditions, such as lipomas (fatty tissue accumulations), spina bifida and neurofibromatosis, a genetic disorder in which tumors grow in the nervous system. The tendency to develop giant nevi may be inherited.

Diagnosis of a Congenital Nevus

A congenital nevus is diagnosed after a thorough examination of the skin by a dermatologist. The doctor may determine that the best course of action is to simply monitor the mole, or may decide on an expeditious biopsy of its tissue. Congenital nevi vary in appearance and may appear as brown or bluish-back, have regular or irregular borders, present with smooth or bumpy skin texture, have hair or no hair. They are most commonly found on the upper or lower back or abdomen, but may also appear on the arms, legs, mouth or mucous membranes. Congenital nevi larger than the size of a fist are more likely to become malignant and so require immediate treatment, as do moles that:

If a decision is made to keep watching the nevus, photographs and measurements may to taken at each doctor visit to record any increases in size of the mole. If a congenital nevus is located over the spine, a magnetic resonance imaging (MRI) scan may be administered to rule out any possible abnormalities in the brain.

Treatment of a Congenital Nevus

Normally, a small congenital nevus does not require any treatment, but may be removed for cosmetic reasons, particularly if it is on the face or another highly visible area, because unsightly skin blemishes involve a danger of psychological damage.

A congenital nevus is typically removed through surgery or laser therapy. Dermabrasion may also be employed to improve the skin's appearance. Removal of a giant nevus is more complicated, because the mole may have to be removed in stages and a skin graft is often required.

Risks of a Congenital Nevus

While surgical removal of a congenital nevus is sometimes necessary and considered very safe, any surgical procedure has inherent risks, including excessive bleeding, possible infection, adverse reaction to anesthesia or potential nerve damage. Surgical removal of a congenital nevus will typically leave a scar. Susceptibility to scarring depends on the location and size of the surgical excision and varies from patient to patient.